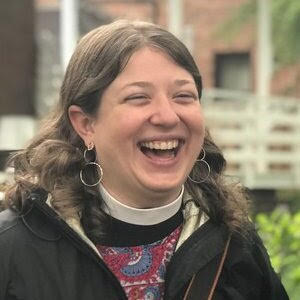 We are excited to announce that the Rev. Beth Scriven has joined us at St. Luke’s as our interim rector.

The Rev. Beth Scriven has spent her entire adult life ministering in congregations, camps, and campus ministries around the Midwest. After her ordination to the priesthood in 2008, she spent seven joyful years as the Associate Rector at St. Clare’s, Ann Arbor (but living in Ypsi!), where her ministry focused on youth, young adults, conflict resolution, and small group discipleship. In 2015, she moved to St. Louis to become the Chaplain at Rockwell House Episcopal Campus Ministry, which drew primarily from the campuses of Washington University in St. Louis and St. Louis University. During her years in St. Louis, she also served as a General Convention deputy, helped create model anti-harassment policies for the Episcopal Church, and met Jesus in the streets as a protest chaplain. She returns to Ypsi from Brownsburg, IN, where she companioned the five-year-old congregation of Good Samaritan through their first-ever clergy transition. Beth loves to read and is continuously shaped by the theology of Howard Thurman and James Martin, the examples of Oscar Romero and Pauli Murray, the fictional worlds of Madeleine L’Engle and N.K. Jemisin, and the analyses of Priya Parker and Brené Brown. In her life outside church, she loves cooking for people, listening to the Indigo Girls, repeatedly watching Heartstopper, Buffy the Vampire Slayer, and The West Wing, and laughing at anything and everything.