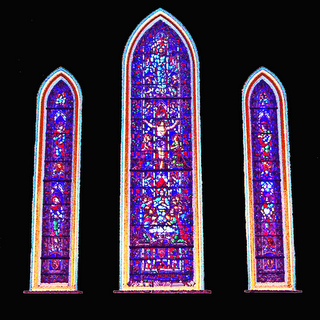 The Quirk Windows (Altar Windows), given in memory of Julia Trowbridge Quirk, is actually three lancet-shaped windows which contain symbols of the Four Evangelists or Gospel Writers as well as depictions of the Last Supper, the Crucifixion and the Resurrection. The symbols of the Four Evangelists are often the winged creatures mentioned in the Book of Ezekiel as well as in the fourth chapter of Revelation:

In these windows one sees the Blessed Virgin Mary and St. John the Beloved; the Apostles, as well as Judas the Betrayer, and the Roman soldiers, as well as our Lord at Supper and Our Lord as the Resurrected Christ.

As I looked, a stormy wind came out of the north: a great cloud with brightness around it and fire flashing forth continually, and in the middle of the fire, something like gleaming amber. In the middle of it was something like four living creatures. This was their appearance: they were of human form. Each had four faces, and each of them had four wings. Their legs were straight, and the soles of their feet were like the sole of a calf’s foot; and they sparkled like burnished bronze. Under their wings on their four sides they had human hands. And the four had their faces and their wings thus: their wings touched one another; each of them moved straight ahead, without turning as they moved. As for the appearance of their faces: the four had the face of a human being, the face of a lion on the right side, the face of an ox on the left side, and the face of an eagle; such were their faces. Their wings were spread out above; each creature had two wings, each of which touched the wing of another, while two covered their bodies.