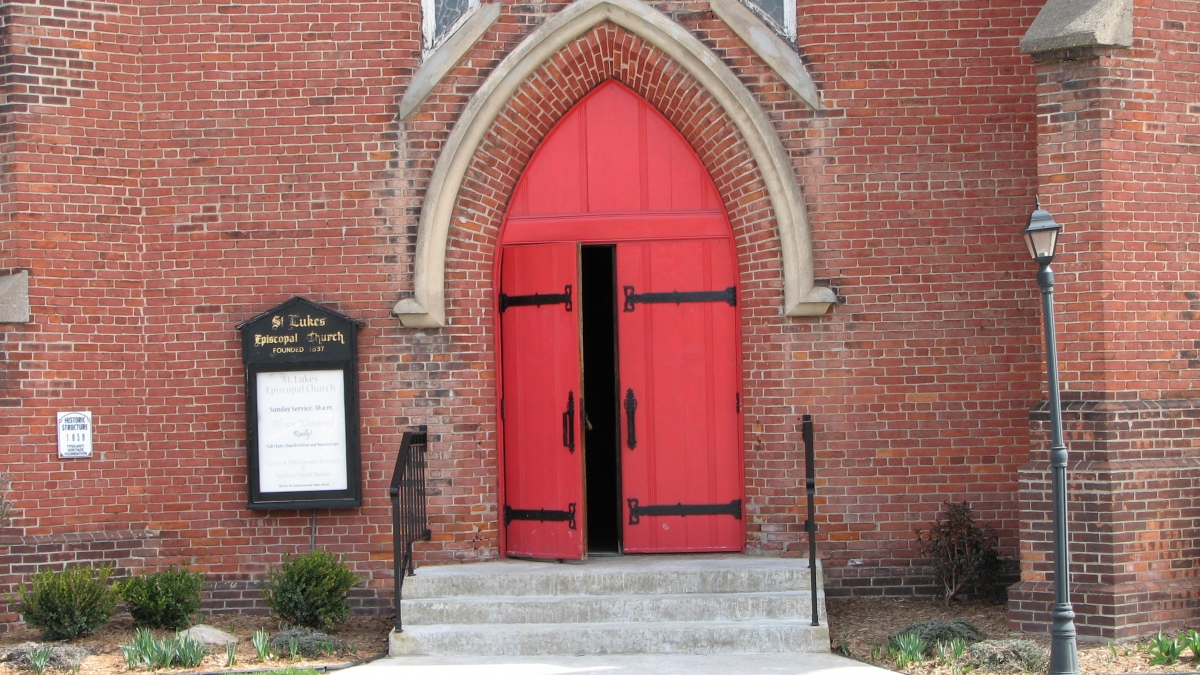 While the parish of St. Luke’s began worshipping at the address currently designated as 120 North Huron in 1830, it wasn’t until March 14, 1840, that the property deed was conveyed from the City of Ypsilanti to the Right Rev. Samuel A. McKorsky, Bishop of the Diocese of Michigan, in consideration for $1,600. As early as 1814 this same plat had been sold to Gabriel Godfroy, Sr. (of Godfroy’s Trading Post) for the consideration of $100. Godfroy, in turn, sold it to Henry I Hunt in 1824 for $816.

The original structure was a simple frame building (probably originally built as a home), and by 1837, it was clear that a new structure needed to be built. It was completed in 1838 and dedicated on July 1 of that year. It was an uphill battle to get this project off the ground and, finally, completed. It turned out that the battle would not end there, though, as the parish had difficulty meeting its financial obligations and would have lost the building had it not been for a $1600 ($2000 with interest) loan from the Missionary Committee of the diocese.

At a meeting of the vestry in March 1856, it was resolved to enlarge and improve the then-existing church edifice, but this proposition soon turned into a plan to erect a new building on the location of the old church. This new building was consecrated on June 28, 1857 (though the spire and pews would not be completed until 1871). It was the first church building built by Ypsilanti contractors Ballard and Edmunds. (Both Arden Ballard and James Edmunds were sons-in-law of Benjamin J. Woodruff, having married, respectively, daughters Adelia and Angelina; and both were members of St. Luke’s. Ardan Ballad was a member of St. Luke’s first vestry.)

The total cost of this structure (furnished) was $15,000. It was designed by Detroit’s premier architectural firm, Jordan and Anderson, and is one of the oldest, thoroughly Gothic Revival churches in Michigan. The structure reflects the changing tastes in, and theories of, ecclesiastical architecture. Early 19th century architects had used pointed ornaments on their buildings and called the resulting design “Gothic.” The interest in building new structures based on medieval forms and decorations, even to the point of copying actual medieval structures, had its origin in the High Church movement of 19th century Anglicanism. The success of that movement is evident in the fact that, when most people think of church architecture, it’s medieval architecture that comes to mind.

The design of St. Luke’s is modeled after Gothic-inspired churches, including St. Paul’s, Detroit. The plan is basically that of a central, gable-roofed box with a tall tower and spire on one side of the facade, and a smaller turret – or pinnacle – on the other. The elevation features pointed arch window and door openings, prominent buttressing, pinnacles, and gables, making it a somewhat subdued example of mid-Victorian Gothic Revival architecture. Numerous churches were built in Michigan using this same basic plan. St. Luke’s was the first outside of Detroit and stands as a monument to the importance of the City of Ypsilanti in the mid-century. Inset over the west-end lancet windows is a great St. James Cross, an homage to the short-lived, fledgling Episcopal congregation of St. James which was reorganized into St. Luke’s.

The exterior view of St. Luke’s has not changed greatly in the past 130 or so years. Except, the spire (the tallest in Washtenaw County) was (sadly) taken down in 1971 in response to concerns about its structural integrity. Apparently, the heavy traffic on Huron Street created vibrations which lead to serious safety concerns.

The bell (manufactured by the Meneely Bell Casting Company in Troy, New York), which was originally housed in the spire, was then moved into the Cloister Garth memorial garden. Instead of tuning his bells, Clinton Meneely relied on exact profiles and, if necessary, cast again and again until he achieved the desired result. Two separate factions of the Meneely family operated two foundries which together are said to have produced 65,000 bells in their life. Alas, they are no longer in production today.

On October 20, 1974, the Rev. Sidney Rood consecrated the Cloister Garth (a small, enclosed garden) for the interment of ashes of deceased parishioners and friends of St. Luke’s. Designed by landscape architect and parishioner Arthur J. Howard and made possible by a gift from parishioner Marion Stowe, the Garth is a place of beauty and repose at all times of the year. In every season, flowers and shrubs enhance the New York bluestone and the St. Francis statue and the mural of the “Good Shepherd” by Jane McAllister Dart, a retired professor of art at Eastern Michigan University.

The church itself is built of soft “Chicago” red brick. The lintels, sills, water tables and other architectural elements, which appear to be stone, are actually of the same red brick, coated with a limestone-colored mortar. Unfortunately, this decorative treatment tended to trap dampness which, in the course of the freeze-thaw cycle and general expansion due to moisture, has resulted in some breaking of the bricks.

← A Parade of Preachers
Interior →